“Like that lor, how to feel good? Old already, leg pain, so many problems”.

At times, Manvel Welen, who prefers to be called Manuel, is forced to undertake a struggle that is difficult to understand: to walk 20 metres from his apartment to the lift and then to the taxi stand.

His slow steps are aided by any fixtures that he can hold onto. His frequent panting reflects the excruciating pain that comes with movement.

Like that lor, how to feel good? Old already, leg pain, so many problems.

Rituals of Food and Fellowship of Friends

Ever since an accident led to a piece of steel being placed in his right arm and leg, Manuel has lived with limited mobility. Despite the pain, he would still make the effort to cross the street from Dakota Crescent to buy food for himself.

Food marks many of Manuel’s social memories. He recalls buying spices from the Malay provision shopkeeper back in Dakota Crescent, which he would use to prepare curry chicken to be shared with his previous Chinese neighbour – who would, in turn, share something else with him.

Another key memory for Manuel is his ritual of kaya toast and kopi he would have with Roger, the manager of the Tung Ling Elderly Care Centre, who prepares this daily breakfast for the elderly residents. This for him created a safe space and a secure sense of community. The centre has since closed when the residents moved out of Dakota Crescent at the end of 2016.

Then there is Sunday: the Sabbath day for Manuel, where he would worship at Church of Our Lady Queen of Peace, along Tanjong Katong Road.

Despite living alone in Dakota Crescent, the semblance of community, food rituals and fellowship had kept him going. 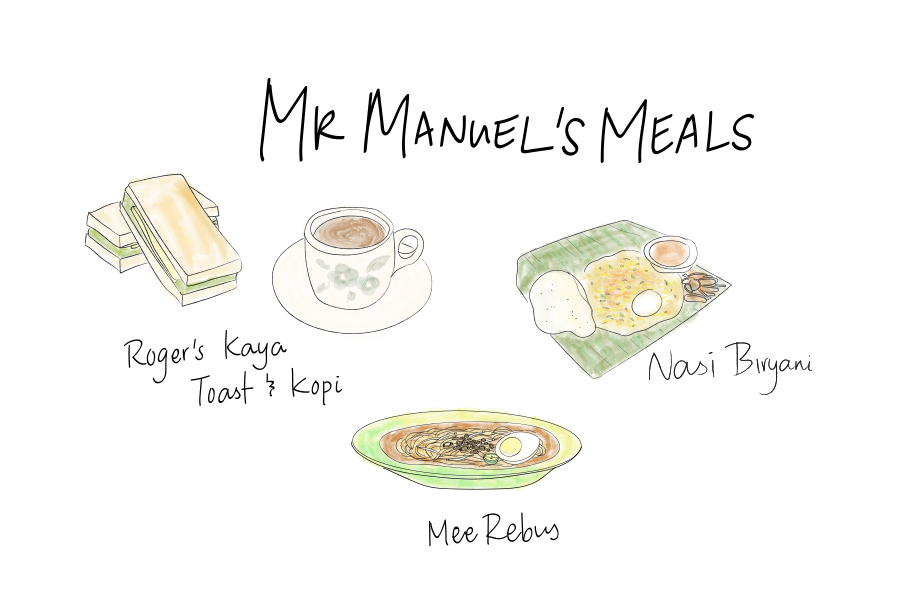 However, the move into Cassia Crescent has not been easy for Manuel.

When he had first moved into the new flat, his difficulties with mobility and disturbed rituals were reflected in the state of disarray of his home.

A strong stench greeted anyone who entered the house. His bed absorbed excretion as walking to the toilet was a struggle for him. Boxes were strewn around, filled with his belongings from Dakota Crescent – moved, but never unpacked. 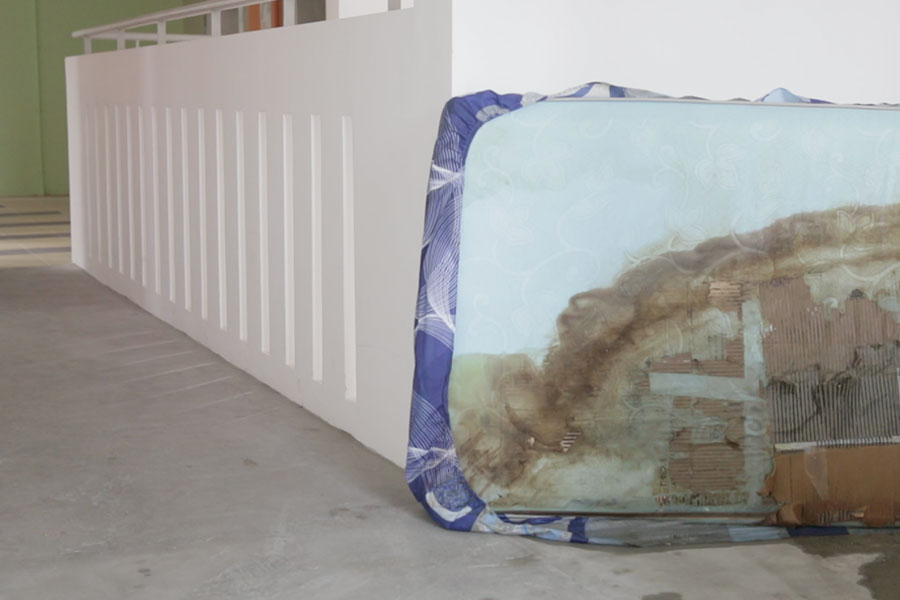 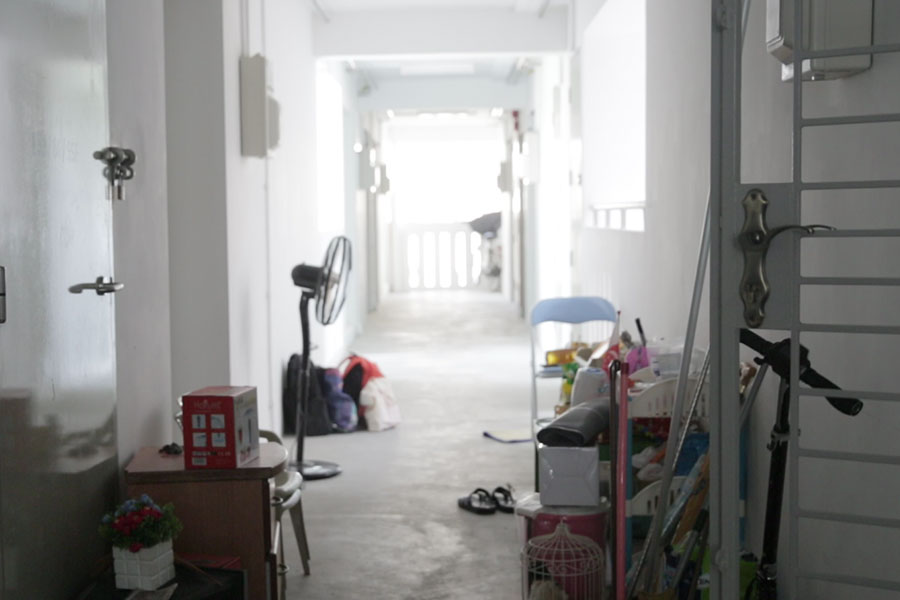 It soon became evident that his housekeeping problems were not just a matter of physical ability, but also of emotional stability.

Manuel was not able to assimilate well into his new surroundings without the practices he was used to, such as his daily rituals at Tung Ling or his walks to buy food.

The new flat at Cassia Crescent is only two blocks further from the food centre, as compared to Dakota Crescent. However, for Manuel this distance becomes significant, making it difficult for him to claim the simple independence that comes with the ability to buy one’s own food. He even hopes to have a coffee shop right in his new block.

As a result of the move, a new eldercare provider was assigned to take care of the residents at the new Cassia Crescent block. However, when the social workers arrived, Manuel was too disoriented to accept their help to bring him food, clean his house or even accompany him to the hospital.

The only thing that he could do was hold on to his faith. He would stay in his bed the whole day, holding his cross in his hands, praying that God would bless him and make things better. Under his bed, a bulk of his possessions includes religious objects and paraphernalia – little things that to him are imbued with heavy significance and comfort.

Manuel’s life reflects a strong reliance on external sources of help. Under public assistance, Manuel is able to finance his bills and medical appointments. His move to Cassia was made possible by volunteers, who found him disoriented during the relocation process, trying to comprehend confusing instructions and unclear blueprints. From his preferences on the new flat (“near the lift, not too high”) to decoding legal documents, Manuel has constantly relied on the kindness of strangers.

His trust in others also leaves him vulnerable, especially evident when the relocation altered his external sources of help. The familiar faces of Roger and the other Tung Ling staff were replaced by new social workers, who despite their good intentions, were not able to win his trust immediately, serving to compound Manuel’s disorientation.

Coming Out of His Shell

A few months after the move, Manuel looks much better than before. Cleanly shaven with a crisp new haircut, he smiles as he makes small talk with us. His flat is clean; and his brand-new bed, donated by the Community Centre, is in good condition.

His new social worker, Nicholas, has discovered Manuel’s food ritual and has begun to buy him lunch daily – including his favourites, such as nasi biryani, chicken rice and mee goreng. Over time, as Manuel grows familiar with his new environment and the new people in it, he has begun to find new rituals with them, and with it, some semblance of stability again.

He has also kept in touch with Roger, who often extends his assistance to him due to their close friendship. “Roger is a good man,” Manuel would often say of him.

Roger Neo, manager of Tung Ling, who has been assisting Manuel before the move to Cassia.

These days, Manuel recognises and calls out for the people who regularly visit and accompany him on his new journey in Cassia, whether to simply cut his hair, buy him food, or bring him to the hospital. He regularly speaks appreciatively of the help received from so many different people, all of which he refers to as “good, very good” and “very nice” brothers and sisters.

More than just helpers, these routines have made them friends. On the day of his cataract operation, Roger and three other volunteers accompanied Manuel to the hospital. Roger cracks a joke, “Manuel, you are very blessed you know. One cataract operation only and so many people here!” and Manuel smiles.


At home, Manuel often points to the framed picture of himself which hangs directly opposite his bed. In the picture, he wears a big smile and is in his favourite shirt. Being invited to look at his photo album is a sign of acceptance into his world – where he reveals the other parts of it: photos of events at the Community Centre or at his church. These pictures are memories from a time when Manuel was more mobile and able to go out regularly and participate in social events.

While this stability reflects a return to routines, some of his problems run deeper than that.

Most days, if not all, Manuel spends his time in his one-room flat, on his bed, with his old portable radio and cross with him.

On weekdays, he anticipates Nicholas’s daily visit and food delivery.

“When is the girl coming to cut my hair? My hair. Very long.” he asks, referring to a volunteer who has cut his hair regularly for him since the move.

On weekends, while volunteers occasionally arrive to spend time with him, there are often days when he sits waiting, wondering if someone will turn up that day. On such days when he doesn’t get food, he survives on his stash of bread and milo.

When is the girl coming to cut my hair? My hair. Very long.

Despite the increasing support that Manuel receives, loneliness remains unavoidable. After all, as the relocation has shown, relationships do not always remain permanent. In Dakota Crescent, Manuel had his neighbours for company, where familiarity facilitated connection with the community.

Today, at Cassia Crescent, with new and unfamiliar surroundings as well as his mobility constraints, the move has likely amplified Manuel’s vulnerability to social isolation. There are limits to community support for such complex problems, although those around try to contribute in whatever small ways possible.

As Manuel often shares in a deeply resigned tone with a quiet sigh, “What to do? This is my life.”